…with four kids, age 8, boys, in 90 degree weather — Mr. Albee, my Zoo Story would give Peter, Jerry, and the Dog a run for its money.  No disrespect, but within these four little men, I found some characters that would more than hold their own on the stage.

My son’s second grade class was planning a trip to the Bronx Zoo. They needed chaperones.  I threw in my hat and the teacher picked it up.  I was set to go to the zoo.

Let’s just say that it was pretty hot out there — and there’s no better place to be in the 90’s than a zoo.  Because, as you all know, animals LOVE to be out acting natural when it’s 90 degrees.  The usual roar of the lion morphs into an exhausted “are you freaking kidding me?”

Along with my son, three other boys–and their lunches–were assigned to me.  I brought a big backpack and all the lunches were able to fit, but it took some cramming–I could feel the oozing of jelly bleeding through the bread as I made room for one child’s lunch and the soft cry of a banana “When he sees me bruised and mushed, he will reject me…” as I jostled it to fit.  It wasn’t a brown bag that this boy brought, it felt like a frozen turkey: 2 snacks, 2 water bottles, a bagel, bag of chips, an apple, and a cookie.  (He would eat the cookie and toss the rest.)

“Thomas.”  That was the name at the front of the bus, and I recalled the same name from my days on the bus.  I always wondered who the hell Thomas was, and now that I am 40, and have the benefit of Google, I finally found out who “Thomas” is.  It’s THE bus manufacturer.  I mean this is a serious company, buses of all kinds.  School buses are just one of their fleets.  The one thing I remember are the Seat Foam Fights we used to have.  We’d take the protective foam that I’m assuming was in lieu of airbags or seat belts and throw handfuls at each other.  Oh what fun.  Tossing foam.  I was living like a madman back then.  My son and I avoided the wheel-well seat, the one that robs the person sitting on the inside of any leg room but provides an intimate familiarity with the vehicle’s shock absorber.  We sat behind the wheel-well, and even so, my knees fused with the seat in front of me.  The kids who were also seated along the aisle swung freely and swiveled to share stories, laughs and their excitement for possibly seeing a baboon hurtle poop.  One boy, very tall and gangly for a second grader, who I shall name Crazy Legs, was also stuck into his seat.  Long legs combined with a slouch fastened him tightly.  When I looked over to him, his expression read “Help, I’m trapped.  If we plunge into a body of water, take the legs.  Take. The. Legs. If not…remember me at the Baboon exhibit.”

We touched down in the morning, when it was a brisk 82 degrees close to 10 a.m.  Each chaperone was given five tickets to the Monorail…which I should call the Mono-animal.  Basically, on the 20 minute ride we saw four species of deer.  Some small.  Some large.  Some endangered.  Some not.  I appreciate the wonder of nature, but the Monorail featured that mysterious natural wonder of The Deer. Being from Michigan, I saw many varieties of deer traveling south riding on the roofs of cars.  My parents have deer in their backyard, they eat all the tops of my father’s tomato plants.  Deer may be cool from a distance, but check out one up close.  Really close.  Anyway, we saw a lot of deer.

The other group of 5 tickets ushered us into the Butterfly house.  In this enclosed greenhouse, butterflies flew free (at least for the short lifespan some breeds allowed.  For instance, imagine a Copper butterfly (2-3 days) fending off the advances of a Monarch butterfly (up to six weeks)

Copper: “Listen, I like you and all, but I don’t see us going too far.”

and that’s the tragic end to this parenthesis.)

Here were the boys in my group: 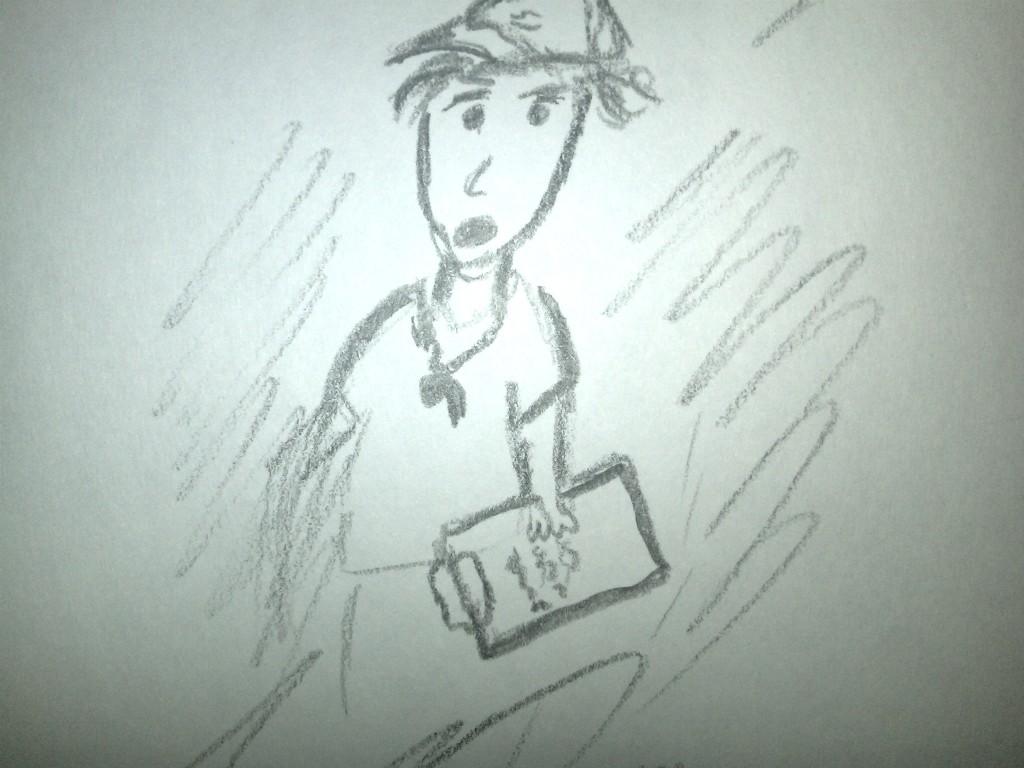 Mr. YHTM holds his clipboard and keeps the group together

You gotta feel for the kid of the chaperone.  There’s an added weight of responsibility.  I remember when my mom would substitute teach when I was growing up.  All’s fair with substitutes until it’s your mom — then, it’s all “Yes Ma’am, No Ma’am” but of course an occasional “O.K. Mom” would slip just to remind everyone that this woman was your mother.  But, if anyone acted up, there would be a lecture in the bathroom, or a cold shoulder during recess, or an errant throw in kickball accidentally targeted at someone’s head.  My son lost a little bit of zoo luster by enlisting himself as second-in-command.  He was my 8 year old echo:

“Then we’ll go to the Gorilla exhibit…”

It was nice to go to the zoo with my son.  To be able to watch him among his peers, but I couldn’t help but feel a bit responsible for the added anxiety that came with his dad wearing the title of “Chaperone.”  Although, the way my son announced that I would be a Chapereaux gave my volunteering a modicum of international flair.  Who would think that a mispronunciation could elevate my duty as boy-wrangler to such great distinction.  Even throughout the chaotic schedule it was fun to see the little guy relax and convince the other three boys that a common black squirrel running into Lion Mountain was actually a rare dwarfed furry-tailed cougar.  I didn’t correct him.  Besides, maybe it was. 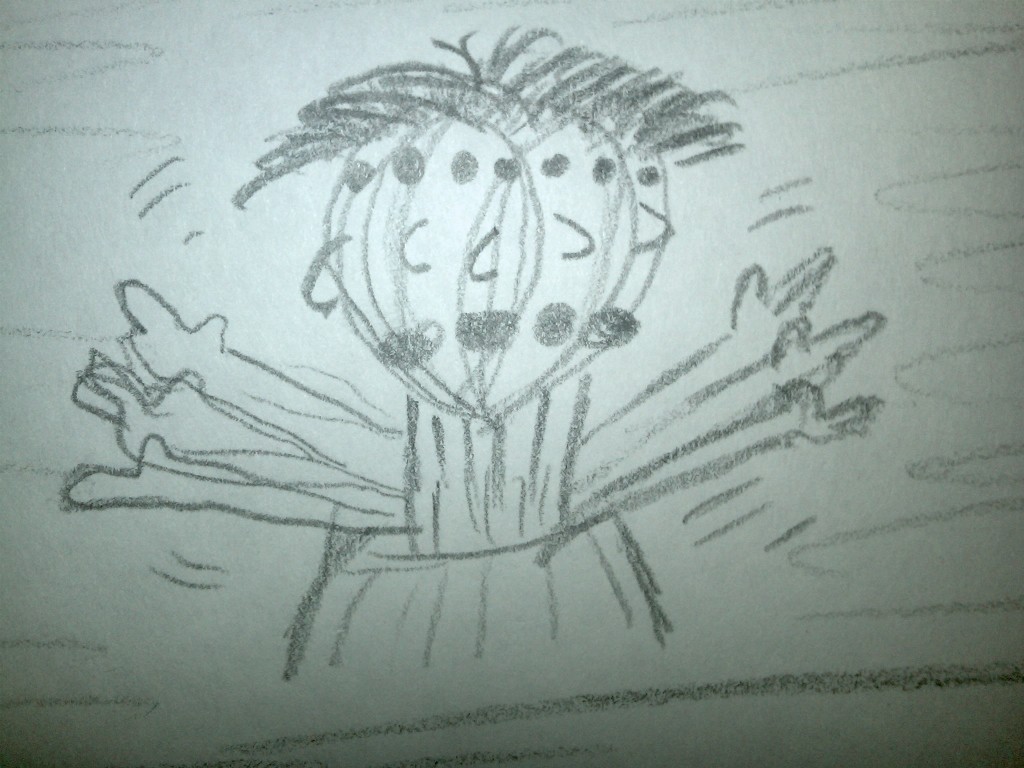 As chance would have it, this kid recently went to the Bronx Zoo.  Possibly, the day before.  He had the whole map memorized.  Any step that didn’t cut the distance to where we intended set off all sorts of alarms:

“And then what?  Short-shrift our camel time?  Is that your plan?”

And then, of course, my son would chime in.

There would be a good five seconds of reflection and then a very quiet:

“Not all camels store water in their humps.”

Truth is, he was right, we jeopardized seeing the camels, but at that point, his route had already made us miss the sea lions and I was bitter.  Maybe at the gift shop I could point to a pack of non-filtered Camels and that would satisfy him. 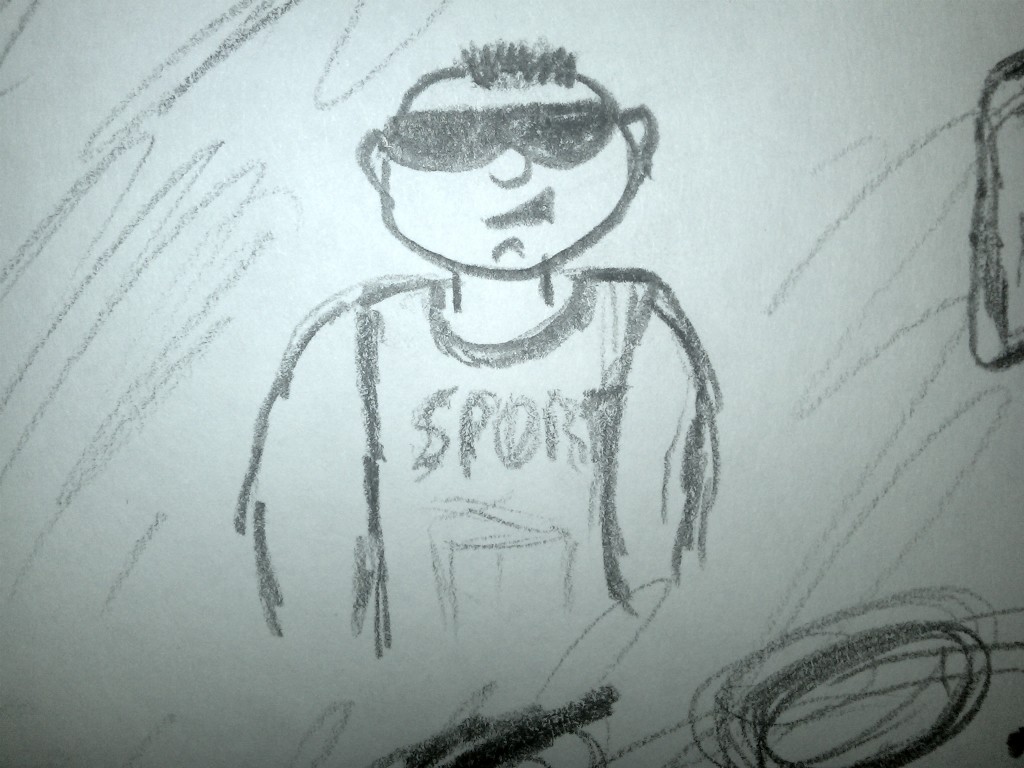 This guy was never pleased.  It was an “uh-huh” and “let’s go, this is boring.”  In his mind, I’m thinking that when people ask “Did you see animals at the zoo?”  He would answer honestly, “Yeah, I saw them…so what?”  I’m not really sure that the idea of going to the zoo was in order to actually watch the animals, not just locate them, mark their positions and move on.

“You know, that deer is slightly different than that smaller one,” I would offer–trying to inspire a sense of awe and wonder about the different types of deer…

And then, from behind me, I heard my son:

“My dad said there’s a slight difference between those two deer, notice the difference.  Notice it.”

We all took a brief moment to behold the two deer.

And after that moment:

I save the most puzzling kid in my group for the last–Mr. Flopsy.  Now, I know that it was dreadfully hot.  I know that we were covering a lot of ground.  I know that sometimes you need to just take a seat and gather your thoughts for a moment.  This young man would just go limp and collapse, no matter where we were.  The first time I heard the horrible sound of someone falling down the stairs and I looked back, it was Mr. Flopsy, tumbling to a prone position in the middle of Jungle Road en route to the Rhinoceros mud pool.  Kids from other schools on tour politely stepped around him, I rushed to his side and asked if he was okay.

I picked him up, tousled his hair (because messing up the kid’s hair would rouse his spirits and encourage him to go forward) and told him there was a lot of zoo to see.

We walked for about five minutes, before I heard the sound again.  Mr. Flopsy, this time, on his back as if memorizing cloud patterns for a test to be given later.

“You can’t do that in the middle of Zebra Crossing!  Get up!”

I was a bit more animated, not yelling, but actually in a bit of shock that this kid would just flop right in the middle…

(You won’t believe this, but as I was trying to finish that sentence, he flopped again.)

He must have rag-dolled at least a half dozen times   On a staircase, on a bridge, waiting in line for the bathroom, at the polar bear pavillion…nothing was sacred, no patch of ground too dirty.  The passive resistance he was able to demonstrate time and time again would make him a first round draft choice for any political cause, movement or protest.   He had a future, a non-violent, passively restrained, horizontally enacted, future.

And in the end…

We found ourselves on the bus, behind the wheel-well, heading back to school.  Some kids slept, some kids were comparing their tan lines…my son and I sat quiet, both looking out the half open safety window that rattled with each bump.

Would I sign that slip that said “Yes, I’d like to be a parent chaperone to the Bronx Zoo” again?   Absolutely.  Even with the heat, the crowd, the lack of animal activity, the “I’ve been here,” “I’m bored,” and “I’m comfortable stretched out on this patch of peacock droppings” it was, at the end of the day, a day with my kid.  And for that I’d sign up to chaperone Charlie Sheen.