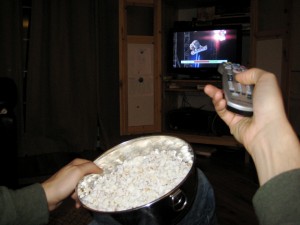 I may not have a lot of time to write today because there’s lots of Olympics to watch.  I’ve been DVR-ing the events, erasing shows to create space, jockeying between the quagmire of two and three overlapping sets of coverage — all the while dealing with the paranoia that I will pull a Torino-Barcelona-Greece-time zone gaffe — whichever one had people clasping hands over ears to prevent spoilers.  I must admit that I knew what happened in Beijing before the big Bob Costas reveal.  Part of me needed to know that Phelps continued on his path for gold.  I needed the reassurance that Misty May and Kerri Walsh continued their dominance in the sandbox.  I’d sneak some radio or internet time to see the quick headline and then wait to watch it that night.  At first, the mistake was just that, a mistake.  I had no intention of skipping ahead to the last chapter to find out it was Colonel Mustard, in the Study with the Riding Crop.  Olympic nerves, plain and simple.  I dig the Olympics.  Maybe too much.

Beating Barbara Walters to the punch.
A maple tree.  A maple tree filled with sap.  That’s the kind of tree I would be (at least if I am being asked now.)  Not only are the games held in the country who displays a red maple leaf on their flag, but I tend to go all water-works for each podium close-up, thereby receiving the label of “sap” from my wife.

“I saw…enough.” (sniff, sniff…as a tear rolls down my cheek…)

“His name is Bjorn Ferry, and yes, he is from Sweden.”

She stares at me rocking slowly in the Lazy-Boy, wrapped in a quilt, gazing with reverence at the medal ceremony on the television.  Even if she’s gotten used to my open-soul reaction every two years, it’s probably a little hard to live with a man, who for a little over two weeks, is moved to tears  every time three people stand shoulder to shoulder at different heights on a riser.

“Are you pulling for Sweden now?”

I look at her a bit wounded.

My vowel and consonant dance stave’s off any quick retort (even if I just said “Yes, I know my Swedish is good” (which it is not, in fact, the closest I’ve come to studying Swedish is assembling a computer armoire from Ikea.))  50% of my native tongue is ashamed.

And she leaves me to watch the first heat qualifier for men’s skeleton.

I’m not the only one who gets caught up during the Olympics.  If you were to eavesdrop around water-coolers, bar-stools, coffee tables, bus stops, kitchen tables, etc…you would probably hear people speak a little differently.  A different vocabulary snared around surprising subject.   An accountant who’s never seen snow, may talk to the CFO of a company about the importance of “avoiding that chatter when you don’t follow your line down the slope.”  A woman buying knitting needles may talk about the way “that flying tomato hung some huge air.”  Loading up some giant spools of copper on a flatbed truck you might even hear two men lamenting the way “he shoulda’ gone quad and then triple — not that triple toe, to a triple axle crap.  I mean, this is the freaking Olympics!”

It’s amazing to hear myself comment on these athletes who spend their lives in gyms, pools, training facilities as if I have any sort of clue.  But I still chime in with both Summer and Winter expertise:

“Oh, she’s gotta put that Sukahara twist back in if she wants to contend.”

“Too much splash-back…he really needs to get those hands set first so he can really rip that entry.”

“It needs to look effortless…now, it just looks like that Iron Cross is a lot of work.  Judges pick up on that.”

“He needs to be quieter in the upper body.  Knees together and quieter.”

“Those edges keep digging in and she might as well go down wearing moon boots.”

“That sweeper is phoning it in…that stone needs to glide.  Wake up, sweeper!  Wake up!”

To sing or not to sing.

Of course the worst thing that I do is to analyze the medal ceremony itself.  Hat on, or hat off?  Hand over heart, or down by their sides?  Motionless and reverent, or antsy and elated?  Tears or nervous giggles?  And then the one I seem to focus on the most:  Do they sing along with the anthem or don’t they?  And, if they do sing, do they know the words?  Are they mouthing or do they start/stop and nod?  Like my wife says, I am a sap, but I’m a discerning sap.  It’s not just an obsession with Olympic protocol — I’m basically doing research for when I am in the Olympics.

I’ve always dreamed of being in the Olympics, I would give anything to walk in with the United States, wearing my Ralph Lauren/Nike designer uniform waving my flag, representing my country.  Since Barcelona, I think I’ve been making it a habit to seriously consider what events I could possibly still dedicate my life to in order to realize my dream.  So far, I’ve let time whittle my options to: Archery and/or shooting in the Summer Olympics and Curling in the Winter.  Now, before I get the archers, the shooters and the curlers upset with me — yes, it takes skill and dedication to achieve Olympian status in your sports…I just feel that they may be more accessible to a 38 year-old who has trouble sticking with a regime of 30 minutes a day.   Those are the sports that I could do alone…but if I can convince anyone else, there are other options…

It just so happens that there’s an event that my wife and I could do together.  As a team.  Let other couple’s play bridge, Canasta, tennis, golf…I found a way that we could enjoy time nestled close, literally hugging each other as we go speeding into a realm of adventure few would dream.

“So, we should find a class or a course or a training ground…”

“I’m not doing the mixed luge.”

“I think it’s a little bit more than sledding.”

“Do you want me to ask someone else?  I don’t want to do that, but we’re talking about a dream.”

During the Olympics, I get used to the quizzical look and the “walk away.”  It doesn’t bother me.  She suffers my machinations every two years.  That in itself is an Olympic event.  She’s the gold medalist for understanding.  Perhaps I could take three other friends into the bobsled.  Any takers?

Swifter.  Higher.  Stronger.   There are plenty of Olympic critics…people who roll their eyes at the whole event…citing the doping, the commercialization, the marketing and industry of it all.  Yes, there are a lot of things I’m personally not happy about, but I choose to focus on the Latin of it all.  It still bothers me that we send “pros.”  What made watching that hockey game upstairs on a small television in my parents room in 1980 was the fact that we were beating pros.  And yes, I know “well if they send their pros, we should send ours.”  But, really?  Is the medal count the most important thing?  Maybe when I was younger, I’d watch the tally with the hopes of dominating the world with our athletic prowess.  Now, when NBC presents the medal count…I find it almost embarrassing that we take time to see who’s “winning.”  It is sport.  It is competition.  I know that.  I respect that.  I want that.  But isn’t each event it’s own entity.  Its own journey?  Its own reward?  Should there be an aggregate amount of metal that raises one country above the rest?  Did the experience of sending the “Dream Team” fill you with pride?  For some, it’s about sending our absolute best — and many sports, the line between amateur and professional is inconsistent and hazy.  I understand, and I see the argument.  But for now, this bead of sap slowly working his way down the maple cauldron chooses to root for the underdog, the underfunded, the under-recognized and those athletes who’s athletic climax takes place in a moment at these games after a lifetime of work.

So, it’s off to the supermarket to buy myself a frozen turkey.  The hallway at my son’s school is just about regulation for curling.  (I stepped it off during a PTA meeting.)  I’m preparing myself.  A couple of friends, a couple of brooms and a dream that one day, I’ll be on the medal stand, hand on heart, hat off, singing as loudly as I can our National Anthem.

Of course, if the turkey thaws — there’s always Summer 2012.

I’ll think of something.

2 Replies to “The Armchair Olympian Examines His Lazy-Boy”